Day two in Cannes was our long awaited trip driving down the coast to St. Tropez.    I grew up hearing t 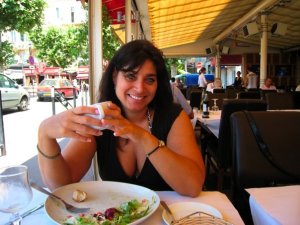 hat commercial “Bain De Soleil” for the St. Tropez tan and have always wanted to go there to see if the tan was different.   That might sound silly to you but I am a tanning expert – seriously if there were credentials for getting the perfect tan, I’d have them.  Anyway,the aim was to go to Niki Beach because it’s famous and sounded very swanky, but basically any beach would have been fine.  We got up (way before 1:00 pm), got dressed and headed out to breakfast in Cannes.  At the time food was an issue with me as I wasn’t a meat eater so finding the right place was a bit of work, but eventually we did.  Breakfast was okay and yes that’s about it; just okay.

We got in the car and drove to St. Tropez along the coast, which was a beautiful drive along the windy mountainous roads, but we still didn’t really have directions or a map or anything.  Somehow we again eventually managed to   find a beach (no, not Niki but it was nice nethertheless) and we spent the day in the sunshine enjoying the water, sun and sand.  We were, however, the only ones who were NOT topless here.  It was a very nice way to spend the 4th of July and I remember that a beach next to ours was having a big 4th Blowout that day.  Of course it was all Americans but they seemed to be having fun.

After the beach we walked around St. Tropez and did some shopping.  We grabbed some food we could eat while walking and basically soaked up the scene in the area, but it was starting to get late and we really didn’t want to drive back in the dark as we really weren’t all that sure where we were going.  So we decided we’d take the highway back to Cannes because we figured it would be easier to find, less scary to drive and it would be a much shorter route.  It does get dark fairly late in the summer (probably about 9pm) so it’s not like we rushed out of there.  It was probably about 6:30 or 7:00 pm when we started out of St. Tropez to find the highway.

Just as before, we were using the sun’s position in the sky and the location of the ocean to decide if we were going the right way. Also we were using this great street sign “tout directions”. I had no idea what it meant (at the time) but always seemed to point us in the right direction if we followed it so we did.  (Just a note later we found out it mean all directions and was the clearest route of of any city – so we really were just lucky following it).  Anyway we head out of town in whatever direction the sign said to and start to look for the highway – but somehow we just don’t find it.  We keep driving and now we are starting to get a little nervous because it becomes more and more desolate the further we go.  Laura is “reading” the map from Avis and I’m panicking.  We head up a hill and come into a very small village and there is NOBODY around.  I mean this place is like something out of a Stephen King novel expect in France (not Maine).  I’m getting more and more concerned but I also am fighting the urge not to stop and get out to take pictures of this place.  It was really beautiful.  There was a church with a tall steeple and quaint little French houses and buildings.  Finally we get to the top of this hill and voilà a whole gaggle of young men are standing in the street.

Well I need directions so I pass them and it isn’t easy since they are really crowding the street.  I’m guessing there were about 10 of them.  I stop just after I pass them, roll down my window and ask “Does anybody speak English?”  They swarm the car (both sides) and Laura also rolls down her window.  The boldest in the groups says “I speak English” and takes a deep breath ready to wow us with his English he says “I am very beautiful”.  Laura and I look at each other and burst out laughing.  We weren’t being mean but it was just funny.  Then he takes stock and thinks about what he has said and smiles, and says “I mean YOU, you are very beautiful!”  We all laugh together and when we stop I ask him for directions to Cannes, knowing fully well his English is not very good and he could get me even more lost but that I have no choice but to ask anyway.  He proceeds to tell us that he also has to go to Cannes but tomorrow.  I smile and say I need to go there now.  He asks “How big is your hotel room?”  I start to answer that it is big by European standards but then realize what he is asking and I tell him it’s not big enough for 3.

He smiles and says that he can take us there tomorrow.  Again I say I need to be there tonight.  Now I’m starting to panic again.  Another of them says he can direct us (he is on Laura’s side of the car).  He says he will draw us a map.  We give him some paper and a pen and he goes to work on this.  After a few minutes he hands us back the paper with his map.  I kid you not this map did not have one label on it for the streets but was more a serious of arrows and turns and to say the least this is not going to help.  We are starting to feel very desperate and by now the sun is beginning to set and getting rather low in the sky.  I try to ask the young man to label the map a bit or explain it in words, but he cannot.  Finally he has a bright idea (and really he saved us with this idea).  He says he will drive to the highway in his car and we can follow him.

We both breathe a sigh of relief and say ok.  He and a few of his friends hop into his car (parked right in front of us) and we all say our goodbye’s in English and French (we do know a few staple phrases after all), and off we go!  And when I say off we go I mean it; the French have little cars, and little roads but they move FAST!  It was all I could do to keep up with this guy we were supposed to be following.  A few times we came up a hill only to loose him on the downhill because he was moving about 90 miles per hour on this hilly windy road.  Finally, after about 5 minutes of this (but it felt much longer at the time) we got to the highway.  They honked and waved and continued on and we entered the highway heading back to Cannes! Whew!  We were saved just in time as now it was dark out.

We drove back laughing and marveling at just how crazy we actually were.  But we got back to our hotel and went directly to the showers and bed.  I don’t remember but I’m sure we slept pretty well that night just glad to be back in our hotel and not wandering around the French countryside.