This past weekend I boarded a plane and took off for St. Paul/ Minneapolis to meet a friend and get some shopping done at the Mall of America.  It was a quick flight from Orlando, but since I had an early flight I decided to spend my night preflight in Orlando at the Marriott Renascence Hotel.  My stay there was very nice and I was able to leave my car for the weekend at the rate of $8 a day, which is cheaper than the airport.  They provide a free shuttle 24 hours a day and it is only about 1.5 miles from the airport.  The hotel is beautifully decorated and was really upscale and comfortable.  I got a good night’s sleep and headed out for my early flight. 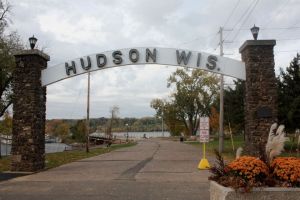 I arrived in Minnesota at 10:30 and as my friend was getting in until 2:30 I had some time to kill.  I rented a car from Avis and took off to Hudson, WI.  Hudson is a lovely little town right over the MN boarder.  It was a typical small town with shops, antiques and restaurants.  There was a park around the water and a great restaurant which overlooks the water where I had an excellent lunch, Pier 500.  I highly recommend the corn crab soup.

Back in St. Paul later with Simone, we walked around the capital building area and around St. Paul Cathedral.  There were many lovely old homes and the leaves in the trees and on the ground were full of pretty colors.  It was warm, though, so not what I had expected.  It was actually 82 degrees there the whole weekend 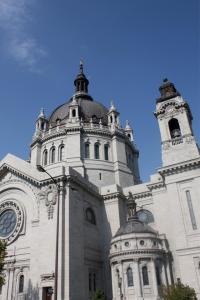 We stayed at the St. Paul Hotel which is a historic hotel overlooking Rice Park.  There are tons of statutes around St. Paul including the one shown here of F. Scott Fitzgerald and myself and tons of Peanuts characters as Charles Shultz and Mr. Fitzgerald were both born in the area.  We ate at a great restaurant Called Pazzaluna – fabulous Italian food and reasonably priced.

On Saturday the shopping commenced in Bloomington at the Mall of America. It was a good thing we fueled up at Mickey’s Diner before heading out.   It was great.  We were exhausted when we finished but all in all it was a great weekend.  Sunday meant some more shopping this time in Nicollet Mall in downtown Minneapolis.  Then it was time to head back to the airport and get home.  Our stimulus for MN was done and we needed to regroup and refill the bank accounts.