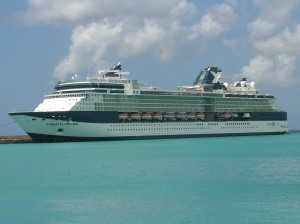 I had some high expectations for Celebrity as it is a 5 star cruise line and I wasn’t disappointed overall.  I mean how could you be disappointed with such an excellent and interesting itinerary as the Black Sea and Greek Isles?  We began at one of the worlds most fascinating cities, Istanbul.  We arrived in Istanbul at 4:30 am and collected our luggage and went through customs.  We had been instructed to purchase an e-Visa before we went so with our passports and e-visas in hand we approached the boarder control agent.  I, being American, gave him my non-EU passport and attempted to give him my Visa.  He didn’t want to even look at it.  Patrick being British did the same with his EU passport (Turkey is NOT part of the EU but sometimes different countries are given different treatment).  They didn’t look at his either.  A waste of $20, paper and ink I fear.  But it is required so I guess every once in a while somebody will check, so be sure you waste your time and money too and get one before you go.

After boarder control and customs we went to the first available cash machine to get some Turkish Lira.  People always like to buy money before they do someplace but the truth is they are “buying” it and why should you pay to exchange money at your bank when you don’t need to.  I always just get cash at the airport in the ATM and pay no fees or charges to do so.  So when I take out $200 in Turkish Lira it cost me exactly what it is supposed to and nothing more and every airport, bus station, and train terminal that I’ve been to has at least one ATM machine.  Of course when we get to the ATM here Patrick decides he needs to have a smoke right then and there because it’s been a long time since his last cigarette in England before going through security at Stanstead Airport.

So he left me with the luggage while he went to have a smoke.  While I waited for him to return I turned on my cell phone and took out cash.  However, instead of him returning, I got a text stating he wasn’t allowed to re-enter so I should get enough cash for two and carry the bags outside and meet him there (yes all 4 of them which was NOT easy).  I did as told and walked out into the dark cool morning to find him.  Armed with instructions received online from another traveler, we went in search of and found the correct bus to take us from Sabiha Gökçen International Airport, serving Asian side of Istanbul to the City Center (Taksim Square).  The bus cost $7 Turkish Lira each (about $3.50 US) and the ride took about 1 hour and 15 minutes as the airport is pretty far from the city center.

We arrived in Taksim Square around 7:00 am and it was light out now and warming up. Since we were very early and tired and hungry we looked for and found a Starbucks in the area and sat down to tea and a snack.  After we were feeling more nourished and less tired (and after I had time to use the wifi and checkin on Foursquare and Facebook), we set out to follow the next step in our directions.  We were to find in the square the Funicular terminal – or I should say I set out to scout the area and Patrick sat with the bags at Starbucks with another cup of tea.  I went to the square and saw a bunch of subway stairwells but since I was looking up for a funicular I failed at my mission.  I returned and together we went back to look again dragging all our luggage behind.  Some nice Turkish man finally showed us (and walked us) to the elevator that was street level and went DOWN to the funicular station.  It really never occurred to me that we were already at the top of the hill and were looking for the way down.  In my defense it was early and I closed my eyes on the bus ride so there was really no way I would have noticed we climbed up in the bus.

We had some trouble with the ticket machine, mostly because it didn’t want to take coins and the bills I had were large.  The cost was $1 Lira and I had a $20 note so or some coins.  It wasn’t accepting coins so I had to use the $20 and get $18, $1 coins as change.  Have I mentioned I hate that other countries use coins as $1?  Bills are so much easier and way less heavy in your pocket!  But now that it was sorted out we got on the tram and went down to the port area.  Using the directions we had (and we didn’t know this at the time), we passed right by our ship and kept going for 2 extra stops (maybe 1/2 mile but trust me while carrying luggage it seemed MUCH further).   The stop did service the port but this is a long pier and we were the 2nd to last ship so it was a long walk down to our ship and you couldn’t go through.  So after got off the tram we had to dragged our bags down the pier past 3 other VERY large ships, come back out to the street where the Istanbul Modern Museum blocked the flow of traffic and then go back down to the pier a few blocks later till finally we reached our ship, the Celebrity Constellation!  (On the way back we took the much more efficient 2 block walk to the correct tram stop which was really good as we had even MORE luggage then).

We arrived at the ship at 11:00 am – but they weren’t boarding yet.  The weren’t even telling you where to drop off your luggage so there were people who were early, like us, just milling about trying to get information.  Nobody seemed to have information and few seemed to even speak English (this included our fellow passengers).  Around 11:30 someone finally told us we could bring our luggage to the door about 1 block down and drop it there and get back on this line to board.  I left Patrick in the line and took 2 bags at a time to be dropped at the door and tagged with our room information.  Once all 4 bags had been dropped (now about noon) they started to board us.  We got scanned and sent to checkin.  There we did the usual by filling out a form on our health, handing in our sea pass information (credit card etc.) and passport which they kept until the last day of our cruise.  We were given a key and sent to the ship.

Basically embarkation went fast once it started but the lack of information we received and the pushing and shoving at the door etc. was not what one would have expected.  I didn’t see a difference here between Celebrity and any other cruise line – it was a mess and only fast because we had arrived so early.  Still we did stand around for about 1 hour before boarding but really we couldn’t do much else with all that luggage.  Once we were onboard the ship we were able to go straight to our cabin.  It was nice – interior (because that is what I like) and not as small as other lines I’ve cruised with.  The bathroom was very nice too!  The shower was bigger than usual (though not large) and there was lots of storage space as well.

Since we had wanted to see a bit of Istanbul before we departed for our cruise, we went straight up to lunch at the buffet and then got off the ship.  It does get dark earlier in September and we didn’t have much time in the city but we were able to walk around a little and see the sea, get some ice cream, take some photos and take a diet coke break while using free wifi at a cafe.  We had to be back on the ship by 6:00 for the boat drill and our dinner was at 8:45 pm in the dinning room.  We’d both been there before and we also knew we had one day at the end of trip to see it again so 4 hours was really enough for that day.  Let’s face it we were kind of tired from the travel anyway.

So here are some of the same things I noticed about Celebrity.  There was a boat drill, it was boring, but at least it was short as it was English only and all other languages could be accessed in the cabin on the TV.  There was the usual format of 2 seatings for dinner (though they were later because Europeans do tend to eat later).  There were 2 shows each night that were far superior to other shows at sea that I’ve seen (not including the Broadway shows on NCL or Disney’s shows which are Disney productions so you expect them to be good, there were bars, a casino, a theater, and specialty restaurants.  There was a coffee shop and ice cream shop, a library and an internet cafe (powered by MAC and state of the art which really is different and GREAT!).  But there were some great differences too.

First off the food was Excellent, even in the main dining room and Buffet restaurant. Usually there are a few nights when dinner is less than exciting and sometimes there are nights where there is nothing one would ever want to eat. On this ship it was hard to choose and whatever you got it was good.  The desserts were fabulous too (I’m sure I gained about 10 lbs. just sampling them all).  The service too was Excellent.  Nobody ever said “No”, or “Wait”.  You asked it appeared, you didn’t ask it probably showed up pretty quickly anyway.  Secondly, the ship was beautiful but understate-ably so.  It wasn’t gaudy or tacky in any way.  The color schemes and themes worked well.  It was elegant.   They lent out umbrellas for rainy days.  They had real prizes for trivia and games.  They were professional in every way – there was fun but it was classy.  No hairy man contest by the pool, no loud announcements in the room every day just to let you know they are having a sale (no announcements in the room at all as a matter of fact).  There were robes in the room, nice toiletries.  The bedding is superb, want an extra pillow just ask.

Overall my impressions were good.  So much so that I purchased a future cruise on board and was given some nice perks to do so.  So much so that even though I’ve been on pretty much every major cruise line I can safely say Celebrity is my favorite so far!  I’m a sucker for a classy atmosphere and a great martini bar!  And I’m sold that sometimes a little extra money goes a long way to having a great vacation.